At first it was just a series of lists. Lists of books, lists of Wizard Cards, lists of Death Eaters, and so on. I was trying to think up a good name for the site and settled on Lexicon because Encyclopedia was taken (by the now defunt Encyclopedia Potterica). Lexicon refers to a list of words, and at first, that's what this was. I can remember sitting on my back porch and running the name Harry Potter Lexicon over in my head and thinking that it sounded okay. I still think it sounds okay, although the Lexicon itself has grown way past being just a list of words.

In November, 2000 the Lexicon appeared for the first time on Yahoo, and within a week was chosen as a featured site in USA Today." (Lexicon Steve)

2002, Jul. 8 - Harry Potter and the Goblet of Fire released.
Oct. 1 - Harry Potter Lexicon Forum created on World Crossing servers by Lexicon Steve.
Oct. 2 - First message posted on forum by Denise P.
Oct. 26 - "Philosophy of this Forum" written by Lexicon Steve, setting the standards for the HPL Forum. "This Forum is for mature people of any age who want to discuss Harry Potter.

Just about anyone and any topic is welcome. However, this Forum will not accept trolling, those who come here just to cause trouble. Tolerance of these trolls isn't helpful, either to them or to the group, so they will be removed as politely as possible.

This Forum expects its members to take a mature approach to the subject at hand. That means that there isn't a place here for discussions of which character is "hot" and like topics. There are other places online for that kind of discussion, and if those types of discussion are started, they will be politely removed.

This Forum also expects its members to use proper English (that includes proper capitalization, spelling, and grammar), this means no Netspeak. We have many members who do not speak English as a first language and so proper English in posts is necessary to allow them to correctly understand what is being posted. (We understand that spelling and grammar mistakes often occur during posting.) The use of phrases such as “N E 1,” “prolly,” and “u” may not be understood or may be misunderstood by these members. If someone insists on using Netspeak, they will be asked politely to change their mode of speech. That kind of speech is appropriate in some places and inappropriate in others. This is one of the places where it's inappropriate.

The rules for topics are as follows: stick with Harry Potter (off-topic threads will be removed) and stay away from the topics of religion and politics in our world (such discussions are not only off topic but can also become very divisive and hurtful, someone may be offended). Please remember that there are people of all faiths, philosophies, ethnic groups, genders and orientations, etc. in this group. If you want to say things, which insult or belittle someone else's choices or beliefs, you will need to find another forum to express yourself in. There is no room for intolerance here. Play nice, share, gaze in wonder, laugh a lot (even at yourself), and be willing to be wrong and to learn." (Lexicon Steve)

2003 - Kip Carter became the first co-host and "second in command after Steve". The forum had begun to take much of the time that Steve would have been using to work on the Lexicon, and, given the rapid speed of growth of the forum, he felt he needed help in moderating it.
- Denise P. became the second co-host.
- World Crossing servers began having problems and the HPLF was temporarily moved to EZBoard where there was a second forum set up when the ad free trial period ran out on the first one.
Jun. 21 - Harry Potter and the Order of the Phoenix released.
- World Crossing problems were stabilized and the HPLF resumed operations there.
- Twenty-some new hosts were added to help maintain the quality of the forum with the swelling membership.

2004, Jun. 4-5 -Pennsylvania Forum Gathering (the first forum meet-up), organized by "Betty Boop". Attendees went to see PoA together.
Jun. 28 - HP Fan Site Award given to Harry Potter Lexicon by JK Rowling "This is such a great site that I have been known to sneak into an internet café while out writing and check a fact rather than go into a bookshop and buy a copy of Harry Potter (which is embarrassing). A website for the dangerously obsessive; my natural home." (JKR)
Nov. (before the 27th) - Lexicon Forum tops Bloomsbury's web site's forum list.

2005, Jul. 16 - Harry Potter and the Half-Blood Prince released.
Jul. 29-31 - Accio Conference in England at Reading University (including a forum meet up). "Forum members had the following talks:
Steve made a bok 6 panel and a talk at the feast
Troels Forchhammer talked about "Twists and Turns in Time"
Audrey Spindler talked about "Harry´s journey towards Gold" ( alchemistically)
The latter two also participated in a roundtable speculating about the end scenario of the series." (Detail Seeker, Immo Gern)

2007, Jul. 1 - Harry Potter and the Deathly Hallows released.
- Azi "met up with Phelim, Liz and Julie H in London to talk about all things Potter." (Azi)

Yes ,there was one- though not a very organized one.
Steve was there as a speaker. Maré, Septentrion, Elanor and myself came from the continental Europe and there were some british members, whose names I try to remember. It is a pity, that the names are locked in some brain drawer, because the program was very good. One member, woh was later banned from the Forum due to massive argumentation, showed us round London to find all the idea giving sites for Diagon Alley and the shops in there.
Then we had a meeting in the "Green Man" with some more british Forumers.
I hope, Elanor has the other names. Dont´t you ?
I tried to upload a picture of the meeting in the Green Man, but that failed.

I just remembered the name of at least one of the british forumers, that were at Accio ( and also at Sectus 2007): Phelim Mc Intyre

I am sorry I am so late in answering your post Immo! I have found some pictures of Accio that I am going to upload now that should make you smile though!

The first picture was taken before we went to the party.
From left to right: Cornelia, Kerstin, me (Elanor), Gina R. Snape, Immo/Detail Seeker behind her, Septentrion (with the deep blue cloak), and Steffie/Mare. 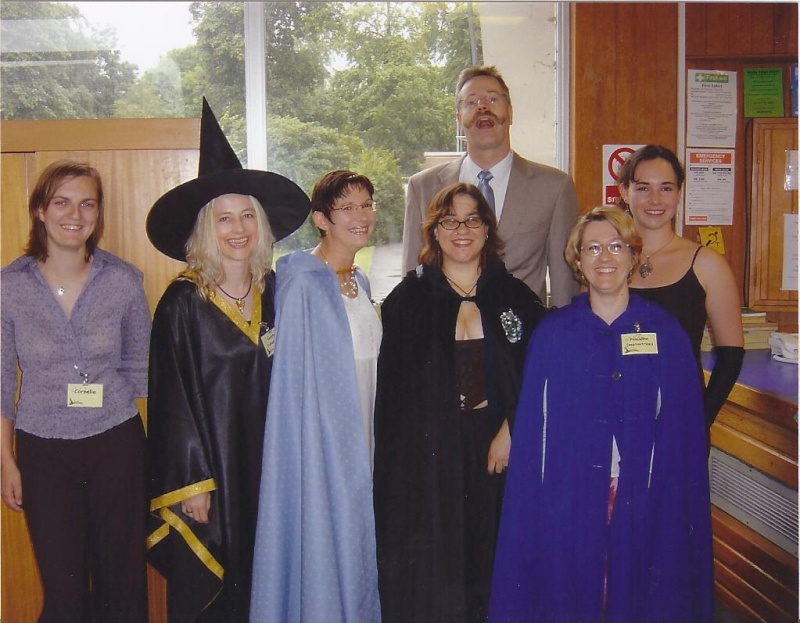 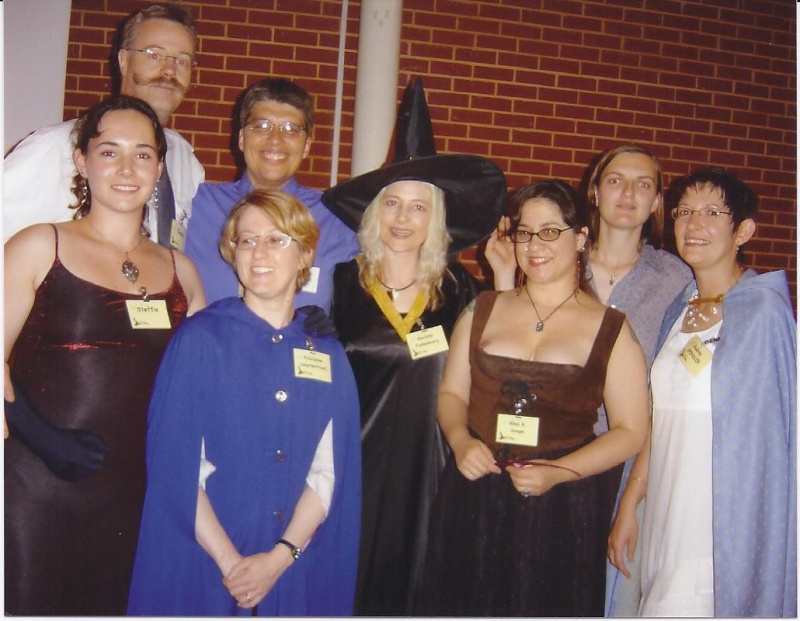 This picture was taken in London where we met with Phelim and Julie.
From left to right: Elanor, Gina, Septentrion and behind us: Detail Seeker, Cornelia, Phelim, Julie, Mare. 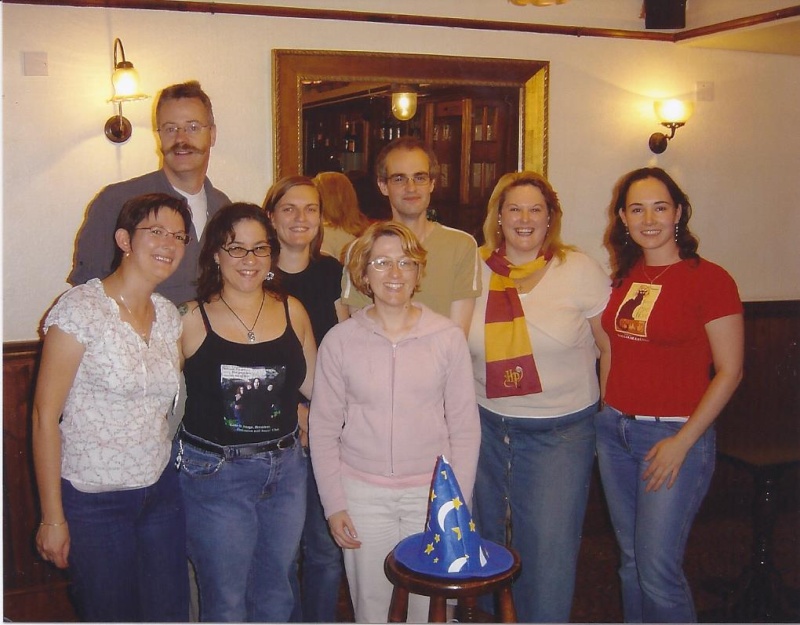 Finally, a picture taken during the Snape trial. The light's not so good but Troels is sitting at the table, in the middle, he was part of the "prosecution team", much to Gina's indignation. 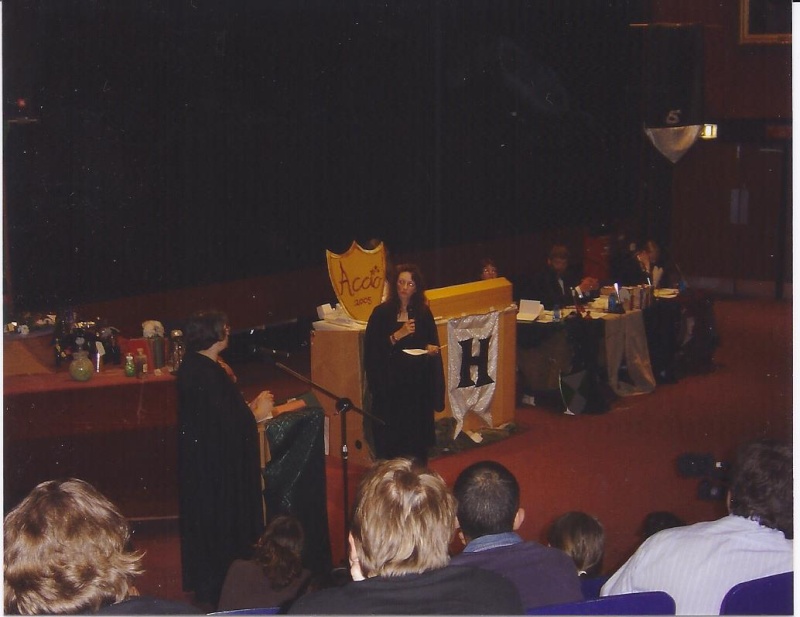 What fun it all was! I have very fond memories of that gathering.

I am sure that I still have the complete schedule of the weekend. If I can find it (i.e., when I find the time to do an archeological search of my cupboards...) I'll scan and post it if somebody is interested.
_________________
"There's an old Earth saying, captain. A phrase of great power and wisdom and consolation to the soul in times of need... Allons-y!" The Doctor