Discussions About The Cast

Discussions About The Cast

I saw this in the news today: (Sorry I can't credit the author -- I didn't see an author name...)

Bower plays Caius in the "Twilight" movies and Gellert in the last two "Potter" installments, while Wright stars as Ginny Weasley in the film adaptations of the best-selling series.

The very private couple has been together since 2009, but didn’t let the public know until February 2010. Bower confirmed the engagement recently when talking with The Daily:

And we’re not really sure what that means.

But surely with the flick of a wand, these two could have the wedding together in no time.

So Ginny is marrying Grindelwald. Shocking.

Do not forget the other Potter and Twilight connection -

[You must be registered and logged in to see this image.]

[You must be registered and logged in to see this image.]

Some of you may know that Dan Radcliffe is currently starring in a play on Broadway "How To Succeed In Business Without Really Trying." It made the news today -- apparently last night's show (which would've been the 100th) had to be scrapped at the last minute. As they were ready to raise the curtain, they discovered a stagehand collapsed in cardiac arrest backstage, and he died. No coroner's report yet, but he was in his 20's I believe. The report said that Dan and his co-star, John Larroquette, made the announcement of the show's cancellation from onstage... That must've been hard for them to do. Sympathies to all involved... They said tonight's show will go on as scheduled.

Oh, that is so sad. There are all kinds of "hidden" medical conditions that can cause such tragedies. It's what happened to my dad. Sympathies to all involved.

As for Ginny and Grindelwald tying the knot, they seem so young. Why do all these young actors/actresses feel compelled to walk down the aisle the moment the are old enough to legally do so? 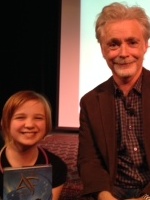